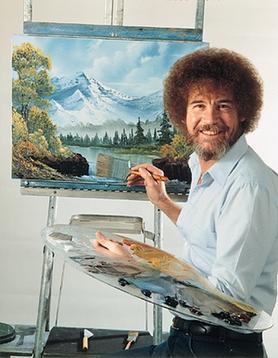 For all of us over the age of 35, Bob Ross’ name instantly conjures an image in our minds: the familiar mellow voice, the big afro, and the scenic paintings. For years, Bob Ross taught us about The Joy of Painting, as he calmly declared that there “were no mistakes in life…  just happy little accidents.”   Ross has risen to the level of a pop culture icon – most popularly as bobbleheads and Chia pets. The Daily Beast even wrote that lately Ross is “a smash hit on social media, where he feels more like a Gen-Z influencer than a once semi-obscure PBS celebrity who rose to fame in the 1980s …”

There’s a reason why we see so much more of the gentle painter than ever before – a recently concluded legal battle for ownership of Ross’s name and image. Furthermore, with the release of a new Netflix documentary on the legendary painter, new details have surfaced of a nasty legal war that had erupted between his business partners and family.

As we have noted in many prior blog posts: failing to coordinate your business succession plan with your estate planning can lead to chaos and unintended consequences. That is precisely what happened here.

Bob Ross Inc. was initially formed by Ross, his wife Jane, and their friends Walter and Annette Kowalski. Although the four were equal partners, Ross was its widely recognized public face, the frizzy-haired artist who shared his painting methods and his humor each week with a national audience. From 1986 through 1994 the company registered several trademarks using Bob Ross’ name and likeness, with Bob’s written consent, and also signed several licensing agreements with third parties, also with Ross’ consent.

In 1992, Bob’s wife Jane passed away. The business structure required that any shares of a deceased partner were to be distributed equally among the surviving partners. And that is how Ross, despite being the public face of the Bob Ross juggernaut, found himself with only one-third interest in the company.

Shortly after Jane passed on, Ross developed lymphoma and the prognosis was grim. In 1994, while battling the disease that would take his life one year later, the Kowalskis approached Ross and they presented him with a contract giving the Kowalskis all commercial rights to Ross’ name, image, voice, biographical material, and creative works. In return, the Kowalskis would pay Ross or his surviving heirs 10% of Bob Ross Inc. profits – but only for the next ten years.

Ross did not agree; and instead modified his estate plan in an attempt to keep all the intellectual rights in his own family. He created the Bob RossTrust assigning 51% of the interest in all intellectual property to his brother, Jimmie Cox, and 49% to his son, Steve Ross.

Ross died in 1995 at age 52, leaving an estate valued at $1.3 million, half of which was his interest in Bob Ross Inc. The Kowalskis, unsuccessful at gaining control of the business while Ross was alive, now sued the estate. In addition to asking for all intellectual rights, they wanted all of Ross’ finished paintings.

Unable to finance a prolonged legal battle the estate executor, settled with the Kowalskis and signed separate Mutual Releases with Bob Ross Inc. stating that the parties and their heirs, assigns, successors in interest, etc., “do, now and forever, absolutely and irrevocably, hereby release each other in and from any and all claims, suits, liabilities, complaints, losses, damages, and charges of every kind and character arising prior to the date of execution hereof.”

It would be more than two decades after the lawsuit settled that Steve Ross realized there was a clause in his father’s trust that bequeathed to him all rights to his father’s name, likeness, and publicity. By then, Bob Ross had become an even bigger and more lucrative business, with the sale of Bob Ross bobbleheads, chia pets, mugs, action figures. Reruns were (and are) still on the air. The streaming service Twitch as well as Netflix picked up The Joy of Painting shows. Calm, the meditation app, even offered a Bob Ross sleep app.

Armed with this newfound knowledge about his father’s trust, Steve sued Bob Ross Inc. He alleged that all the Bob Ross Inc. business deals and products that used his father’s likeness were unauthorized. He demanded compensation. Unfortunately for Steve, the federal judge didn’t agree. In 2019 the court ruled that Ross’ trust could not have given away the rights to Steve, because the trust did not own those rights to begin with. The ruling stated: “Plaintiff would not own the intellectual property at issue because the Trust never owned it. Similarly, because Bob Ross gave Bob Ross, Inc. his right to publicity during his lifetime, it could not have transferred to his son on his death.”

Simply put, it didn’t matter that Bob Ross’ trust said Steve was to inherit the intellectual rights. The business agreement prevailed. Steve got nothing from the business empire built on his father’s persona and art techniques.

Legendary Lesson: If you have a business, whether it’s a corporation, partnership, LLC or other business structure, your estate plan must be coordinated and integrate with your business planning.   Be sure to consult with an estate planning attorney that understands the dynamics of both.

We at Trust Counsel know that your business is sometimes your family’s greatest asset, and we want to keep it that way! We ensure that your plans for business succession are clear and in the best interest of you and your loved ones. We also make sure that your Estate Plan is clearly written and reinforces what your ultimate intentions are. Contact us today and let us know how we can help protect your future.