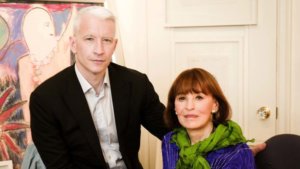 In our last newsletter, I discussed the wide spread speculation that fashion icon, Gloria Vanderbilt, would leave her entire legacy to charity and effectively disinherit her sons, including famed CNN Journalist Anderson Cooper.

Well, Vanderbilt surprised many.  As it turns out, the socialite who was vocal about her negative views on inherited wealth left the bulk of her estate to Cooper.  This is ironic given the fact that Cooper himself has been quoted as calling inherited money a “curse.”

Probate documents reveal that Vanderbilt left a midtown Manhattan Condo to her eldest son, Leopold Stokowski and bequeathed the rest of her estate to Cooper.  Her estranged middle son, Chris Stokowski, was left out of the will entirely.

While the “poor little rich girl” had a reported net worth of approximately $200M, Cooper’s inheritance is a mere $1.5M.  It will be interesting to see what Cooper does with the family curse.