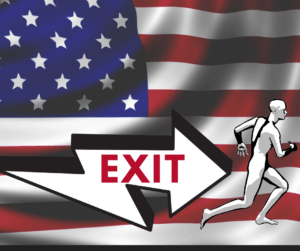 With the birth of the Duchess of Sussex’s new baby, Archie Harrison Mountbatten-Windsor, some attention has been given to the tax consequences of becoming a U.S. citizen, as the new royal baby automatically acquired citizenship by virtue of being born to a U.S. citizen mother. In light of this, related conversation concerning the consequences of expatriation has come to the forefront. As you may know, the United States’ complex tax filing regimen, coupled with other family reasons, provides great incentive for individuals to renounce their citizenship. Those who renounce their citizenship are subject to an exit tax. However, many people are unaware that this exit tax also applies to foreign individuals renouncing their green cards as well.

The exit tax requires individuals leaving the U.S. tax system—i.e. “expatriates”— to pay a U.S. tax on their income and worldwide assets, one last time. According to this tax, all assets are treated as if they are sold on the day before the citizenship or resident status is terminated. As a result, if the imaginary sale produces any profits, the expatriate must pay tax on those profits. The idea is that when an individual expatriates, the U.S. gets to tax that individual on items that may be out of its reach after the expatriation. Since U.S. citizens are taxed on worldwide income and assets, the government wants to be able to collect tax on the wealth that a U.S. citizen has accumulated.

Further, before the exit tax is applied, an event must occur that terminates the individual’s citizenship or long-term resident status. A U.S. citizen who relinquishes U.S. citizenship will always be an expatriate. However, a green card holder who terminates his green card will be an expatriate only if he is a “long-term resident” under a count-the-years test—meaning a lawful permanent resident in eight of the 15 years ending with the year of expatriation.

If you think this may be your situation, seek advice from a professional that can give you advice that is relevant to your situation.