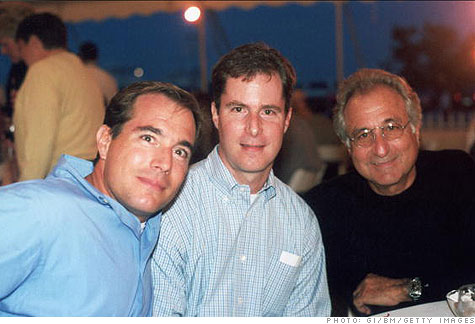 Andrew Madoff, the son of convicted Ponzi schemer Bernard Madoff, left more than $15 million in property to his children, wife and fiancee in his will following his death from lymphoma last last year.

Andrew Madoff listed $11 million in personal property and $4.5 million in improved real property in his will, which was filed with Surrogate’s Court in Manhattan and made public shortly thereafter. Mr. Madoff left all of his tangible personal property to his daughters, Emily and Anne, and one-third of his estate to his estranged wife, Deborah West, according to the will. The rest goes to his fiancee, Catherine Hooper. Ruth Madoff, his mother, isn’t listed as a beneficiary.

As heads of the trading desk at Bernard L. Madoff Investment Securities LLC, Mr. Madoff and his older brother, Mark, led the market-making business of the once-respected firm while their father, based on another floor, handled client investments.

The firm’s clients invested $17.5 billion in principal and were led to believe, through falsified statements and trade confirmations, that they had a total of $64.8 billion in their accounts. Irving Picard, the trustee appointed to collect money for victims of the fraud, had recovered $9.8 billion as of July to partially reimburse clients who lost money.

On Dec. 10, 2008, the brothers contacted the Federal Bureau of Investigation to expose their father’s long-running fraud. The brothers called the FBI, they said, only hours after first learning of the fraud from their father, who confessed to them because his investment-management business was being inundated with redemption orders he couldn’t fill.

Bernard Madoff is serving a 150-year term in federal prison in North Carolina.

Though sued for millions of dollars, the brothers were never charged with complicity in the fraud, or with any other wrongdoing, although they never shed public suspicions that they were involved in their father’s scheme. Mark Madoff with his wife, Stephanie, and their two children

Mark Madoff committed suicide on Dec. 11, 2010, the second anniversary of his father’s arrest. Andrew Madoff, in April 2013, disclosed the recurrence of his mantle cell lymphoma, a form of cancer for which he had been treated in 2003. He underwent a stem-cell transplant in May 2013, following chemotherapy and radiation.

Mr. Picard sought $73.8 million in repayment from Andrew Madoff, part of $255.3 million he targeted from Madoff family members who, he said, used money from the firm to “fund personal business ventures and personal expenses such as homes, cars and boats.”

Now, Andrew Madoff’s Estate Could Face Clawback…  Have you ever heard of a clawback? When investors are defrauded in financial schemes, courts will often appoint trustees. These trustees have the responsibility of going after people who profited from the schemes and returning money to the defrauded investors. In a Ponzi scheme, this often means that those investors who paid in first and who received payouts from the funds that later investors paid into the scheme have to return the money they received. This is what has happened in the case of Bernie Madoff’s Ponzi scheme. It’s called a clawback.

With Andrew Madoff’s death, however, there is a new twist. The trustee has long tried to recover money from Andrew with little success. Now that he has passed away, his estate will have to defend itself against the trustee’s attempts. The issue is not one that goes away upon death.

Interestingly, The New York Daily News reported that federal investigators were considering charging Andrew with tax evasion. This move would have pressured him to repay the money, even though investigators could not prove Andrew was involved in the scheme.

The Madoff situation is obviously unusual. One thing to keep in mind as it develops, however, is that any legal issues you might have at the time you pass away may continue. When that is the case, then your estate still has to deal with them. If you are someone who might be sued because of business dealings, you will want to consider this when choosing an executor or trustee.