Bobby Brown May Get Some of Whitney’s $20M After All

Whitney Houston was found dead in the tub three years ago. Now her 21-year-old daughter might be on life support for the rest of her life in the wake of a similar accident.  With mom gone and the boyfriend (husband?) Nick Gordon persona non grata, responsibility for deciding when it’s time to discontinue treatment has fallen on dad Bobby Brown.  Other members of the extended family have publicly challenged his decisions and even reported versions of the underlying situation that broadly contradict what Brown and his lawyer are telling the public.

It’s more than a mess.

Part of the problem here is that Bobbi Kristina was already far removed from the family. Georgia is a long way from the Houston family who live in New Jersey, leaving Bobby Brown – who lives only a few towns away – as her primary family connection in the area.  The apparent absence of any kind of medical directive also makes Bobby the de facto next of kin when it comes to determining how long the doctors should work to keep her alive.

Parents outrank boyfriends or even fiancés BUT here is where it gets weird because everyone was under the impression that Bobbi Kristina and Nick Gordon were already married.

On January 9th, 2014, Bobbi Kristina announced on Twitter, that she and Nick Gordon are:  “Happily married.” She tweeted:

“@nickgordon! #HappilyMarried, SO #Inlove. If you didn’t get it the first time that is.”  (Yes, I did just quote Twitter – it is a brave new world.) 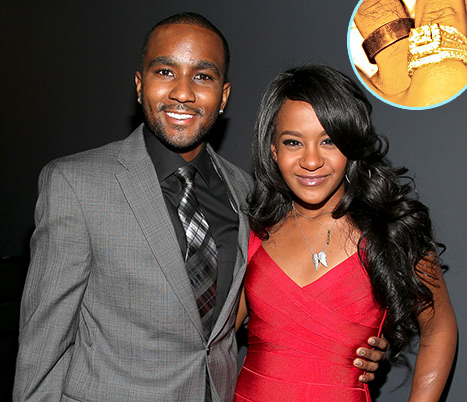 Gordon claims he and Bobbi Kristina are married but the family’s lawyer says the couple never tied the knot.  Apparently for the last year of her life Bobbi and Nick even thought that they were legally married but now everyone is not so sure.

If Bobbi Kristina and Gordon had ever officially tied the knot, he would have had the spousal right to make medical decisions for her in her comatose state.   Instead, like a lot of couples living together without benefit of a marriage license, their opinions can be overruled at any time once hospital administrators get in touch with the parents or other blood relatives.

Nick’s status is in limbo and off limits at the hospital, since both sides of the family hate him.

On the other hand, while his relationship with Bobbi Kristina was legally nebulous, it was probably a lot closer over the last few years than ANY bond she had with her father because Bobbi and Bobby apparently didn’t talk much for at least two years after the death of her mother.   If anyone knows her views on what kinds of life-saving procedures the doctors should try, it’s probably Nick – the man she thought she was married to and lived with for the last two years!  Yet, it’s Bobby making the calls and Nick is barred from the hospital. If Bobbi Kristina had wanted the situation reversed, it’s too late now to set out those wishes in writing.

Meanwhile, it’s unlikely Bobbi Kristina left any kind of Will behind and she is the sole beneficiary of the $20 million her mother accumulated before her own death. She started receiving distributions last year and the rest of that money would have passed on to her over the next decade.

A husband would have inherited everything in the state of Georgia. No wedding on the books means Bobby gets some of the money when Bobbi Kristina dies.

Bobby was  cut out of the lines of spousal inheritance after the divorce, but now he may end up with some of Whitney’s money after all. We know Whitney Houston had set up a trust for the benefit of Bobby Kristina, and any assets remaining in the trust at Bobby Kristina’s death pass, under the terms of the trust, to Whitney’s mother and brothers (rather than Bobby Brown). This is one of the benefits of passing wealth through a trust rather than outright you have much more control after death.

Still, Bobbi Kristina has already received some distributions and may have her own separate assets, which would pass (if she didn’t have a Will) to her father, as sole heir and NOT TO GORDON, as she might have wanted.