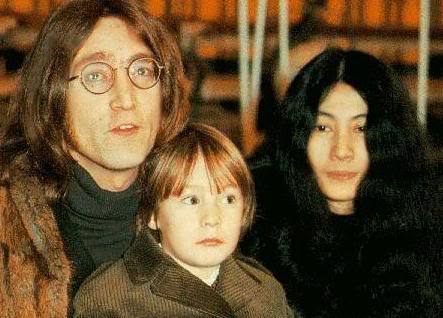 When John Lennon of the Beatles was tragically murdered in 1980, his widow, Yoko Ono, took charge of his legacy and his fortune. As arguably the most successful songwriter of all time, what did Lennon leave behind?

According to Lennon’s first wife Cynthia, as part of the 1967 divorce Lennon created a trust for his first born son Julian to receive 100,000 pounds when he turned 21, but he had to split that equally with any other children born to Lennon. From then on, Lennon saw his son Julian no more than once per year, and sometimes went years without seeing him at all. The story was much different before the divorce.  Julian and Cynthia lived with Lennon for Julian’s first five years of life.  Reportedly, Lennon set up a trust at that time, with about 250,000 pounds for Julian to receive when he turned 25.  But when Yoko Ono came on the scene Lennon’s relationship as a father to Julian ended as well. In a 1980 interview – not long before he was shot and killed – Lennon said that Julian was born from an unplanned pregnancy.  He even said Julian “came out of a whiskey bottle,” unlike Lennon’s son born later from his marriage to Yoko Ono.

So it should not have come as a surprise that when John Lennon’s will was revealed, it left everything to a trust controlled by Yoko Ono and an accountant, the beneficiaries for which are believed to be Ono and their son, Sean.  Julian was reportedly left out in the cold. Also, because Ono was named as the sole executor of John Lennon’s estate, it gave her complete control over John Lennon’s image, legacy, and much of his song rights.

Of course, Lennon had also given Ono similar control while he was still alive, by giving her power of attorney.  Ono used that power to invest Lennon’s money in real estate, art, and Egyptian artifacts.

Lennon died with an estate worth a reported 220 million pounds. Ono has continued to manage the estate, along with Lennon’s image and royalties, to bring in around $12 million per year in earnings. It could have been higher, except that much of the Beatles catalog of music was sold in 1985, for $47.5 million.  Who was the buyer?  Michael Jackson, of course!

Julian did not take being snubbed from the John Lennon estate lightly. He sued, engaging in a long battle against Ono for a share of the fortune.  Julian felt that Ono had improperly influenced Lennon. Eventually, they settled the dispute, but not until 16 years after Lennon was killed.  While the amount of the settlement is confidential, media reports place the figure at around 20 million pounds.

For his part, Julian said he couldn’t disclose how much he received, but says what he received wasn’t what he considered to be fair.  He felt it was much preferable to the alternative – facing a lengthy court battle against Ono when she had the wealth of the estate behind her.

The John Lennon estate teaches a critical lesson about estates.  Often, no one wins when a family faces a long and expensive probate fight, which are far more common than most people realize (especially in second-marriage families).  Julian was probably wise to settle when he did, allowing him to get on with his life and save a small fortune in legal fees.