A Prolonged Death Provides Lessons for the Living 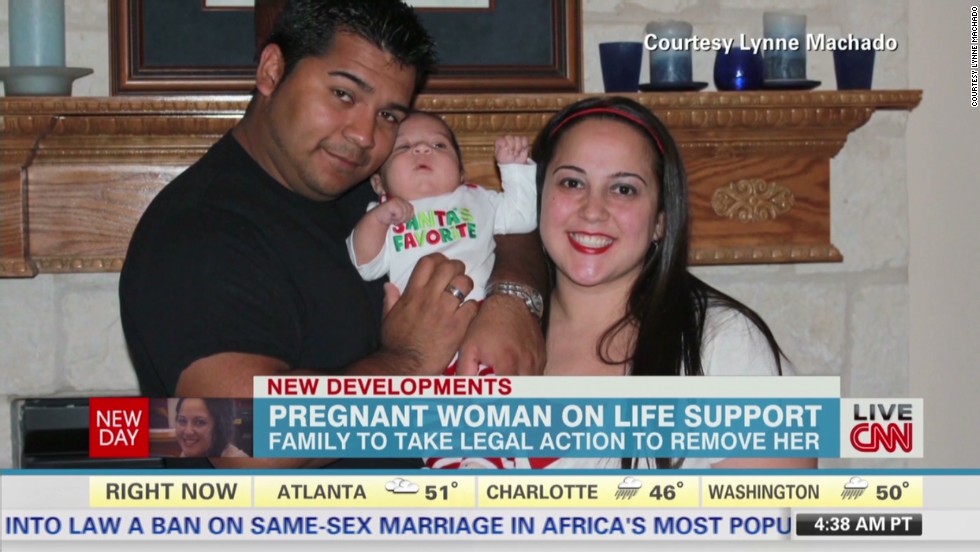 Everyone agreed on one thing:  Marlise Munoz was dead.  The 33-year-old Texas wife, mother and paramedic got up in the night on Nov. 26, 2013, to tend to her toddler son and suffered a pulmonary embolism.  Her husband Erick, also a paramedic, was able to briefly get her breathing again and she was transported to John Peter Smith Hospital in Fort Worth, where she was placed on life support.

But everyone knew and two days later medical tests confirmed it: no brain activity.  In every sense of the word, Marlise was dead.

Unfortunately, Marlise was also 14 weeks pregnant and what was a tragedy was turned into a travesty that was only cut short by a Texas court late last week.  JPS Hospital refused to remove Marlise from life support because of The Texas Advance Directives Act, which states that, “A person may not withdraw or withhold life-sustaining treatment…from a pregnant patient.”

Erick and Marlise’s parents had asked JPS Hospital to remove her from life support after her death was confirmed, stating that she had expressed to them many times that she did not want to be artificially kept alive.  As a paramedic, she knew what that could have meant for her loved ones.

However, Marlise had not executed an advance medical directive or a living will clearly stating her wishes.  This is why all of our advanced health care directives specifically address pregnancy (and we never use a form due to ambiguities in many of the form documents), for every plan we draft for a woman who can bear children.

But Marlise didn’t have that handled and her family had no choice: they had to go to court.  They also had to endure the worldwide media frenzy surrounding their personal tragedy, and were buffeted by activists on all sides of the issue.

On January 24, a Texas District Court Judge ordered the hospital to declare Marlise dead and release her body to the family.  Her attorneys argued successfully that she was no longer a “patient” since she met every benchmark for death.  She was removed from life support on January 26 and will be buried in a private family ceremony.

This sad case is an extreme example of what can happen when legal protections are not put in place prior to a tragedy that can happen to anyone.  To put the proper protections in place for your family, contact our office to schedule a time for us to sit down and talk.