Anderson Cooper announced the birth of his son, Wyatt, Thursday evening on his show and in a lengthy Instagram post. His son was born on Monday via a surrogate and is named after his father who died when Cooper was 10.  Cooper said he regretted that his parents and brother were not alive to meet his son. Cooper’s mother, Gloria Vanderbilt died last July at the age of 95.

We wrote about the Vanderbilt estate last year since it had some interesting particularities. As a recap, Anderson Cooper had claimed for years that he wasn’t getting a dime of his mother Gloria Vanderbilt’s money.  In their memoir and Anderson Cooper himself, discussed the importance of earning one’s own money, regardless of a family’s wealth. In a 2014 Howard Stern interview, Anderson Cooper stated:

“My mom’s made clear to me that there’s no trust fund. There’s none of that.  I don’t believe in inheriting money. I think it’s an initiative sucker. I think it’s a curse,” Cooper said at the time. “Who has inherited a lot of money that has gone on to do things in their own life? From the time I was growing up, if I felt that there was some pot of gold waiting for me, I don’t know that I would’ve been so motivated.”

Stern was in disbelief, arguing that leaving your children an inheritance is a loving gesture.  To which, Cooper responded, “We believe in working.”

To see Cooper’s point, you need only look at his grandfather, Reginald Vanderbilt. News reports indicate he was a gambler. By the time he died in 1925 at age 45, he had squandered the vast railroad and shipping fortune passed on to him by his grandfather. 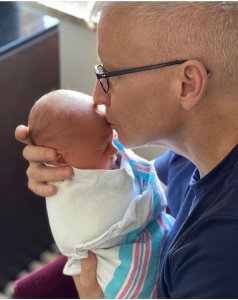 Vanderbilt, like some other super-rich parents — think Warren Buffett and Bill Gates — have said they do not plan to leave their adult children a great percentage of the wealth they’ve accumulated (of course, it’s a bit relative if you’re still getting millions of dollars from mom and dad) and from the sound of it, Cooper seems to be of the same mentality.

At the time of her death, however, her children were not totally disinherited.

In addition to Cooper, Vanderbilt was also survived by sons Leopold Stokowski and Christopher Stokowski. A fourth son, Carter Vanderbilt Cooper, predeceased her in 1988. New York State Surrogate’s Court filings revealed that Vanderbilt left her Manhattan apartment to son, Leopold, and the remainder of her estate to Anderson. Christopher Stokowski, with whom she was reportedly estranged, (who cut himself off from the family 40 years ago) was not included in the last will and testament will reportedly get nothing.

Court filings seemed to reveal that Cooper will inherit the majority of the Estate although the number reported in the court is around $1.5 million. The court filings, however, may not present the entire picture. It is possible that Vanderbilt executed non-probate documents such as trusts which distribute monies to a host of other individuals or charities. The only assets that will pass via Vanderbilt’s last will and testament are those held in her individual name. Trust funds, accounts with named beneficiaries, life insurance policies, and joint accounts will all transfer upon death to the joint owner or a named beneficiary.

Ultimately, we are not really sure the totality of what Cooper inherited from his mother – but clearly she back-tracked the decision to leave him nothing.  It will be interesting to see if he will have the same philosophy when planning for his son’s inheritance.

Worried about leaving your children an amount of money that can be squandered?  Come in and talk to us. We don’t just draft documents; we ensure you make informed and empowered decisions about life and death, for yourself and the people you love.  That’s why we offer a Family Wealth Planning Session, during which you will get more financially organized than you’ve ever been before, and make all the best choices for the people you love. You can begin by calling our office today to schedule a Family Wealth Planning Session and mention this article to find out how to get this $750 session at no charge.