Marilyn Monroe’s Estate is Making People Rich – But Who?

The story of Marilyn Monroe is one filled with beauty, mystery, and tragedy.Fifty years after her sudden death in 1962, Marilyn Monroe is still very much an icon of beauty and glamour. But today, others are making big money off of Monroe’s estate, something that has frustrated and upset those who knew her. Her failure to create an estate plan to protect her estate and her legacy has enabled strangers to continue to profit off of the legacy she left behind.

When Monroe passed away, she left a simple will with a list of bequests. About three-fourths of her fortune was left to her acting coach, Lee Strasberg. She was extremely close to Lee and his wife, Paula, and clearly wanted them to benefit from her fortune and, perhaps, to help protect her legacy. But when Strasberg died in 1982, it was his second wife, Anna, who inherited the Monroe estate. Anna didn’t even know Marilyn, and perhaps that explains why her approach to the inheritance was to license and sell Monroe’s image for profit. With the help of CMG Worldwide, a company that specializes in managing – and profiting off of – the estates of dead celebrities, Anna has made millions.

According to CMG CEO Mark Roesler, their company has licensed Monroe’s image and products to hundreds of companies, including Coca-Cola and Mercedes-Benz. Monroe’s likeness has been used to sell everything from perfume to clothing, giftware, collectibles, and even paper products. 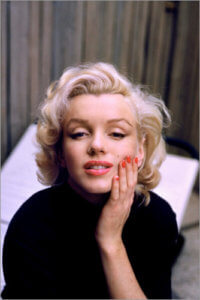 In her will, Monroe wanted her personal possessions and clothing to be distributed among her friends. Anna Strasberg started auctioning off Monroe’s personal belonging in 1999. The famous gown that Monroe wore to President John F. Kennedy’s birthday party sold for more than $1 million. A baby grand piano Monroe inherited from her mother was sold to singer Mariah Carey for more than $600,000.

Later, in 2012, Strasberg reportedly sold what was left of Monroe’s estate to a second branding company, ABG, for an estimated $20 to $30 million, while retaining a position as a minority partner in the deal. While her profiteering off of Monroe’s estate has not gone unchallenged, a variety of lawsuits have been unable to prevent the further sale and use of Monroe’s legacy.

Based on Monroe’s will and the testimony of her friends, it is unlikely that she would have wanted someone she didn’t know making millions by selling off her belongings and branding her face. But in the absence of an estate plan, there seems to be no way to stop it now. Had Monroe created a trust, which would have provided handsomely for her beloved acting coach during his lifetime, that trust could have then been used to give her remaining assets and wealth to Monroe’s choice of individuals or charities. Instead, the tragedy of a life cut short is being packaged and sold like any other object, something Marilyn Monroe never wanted.